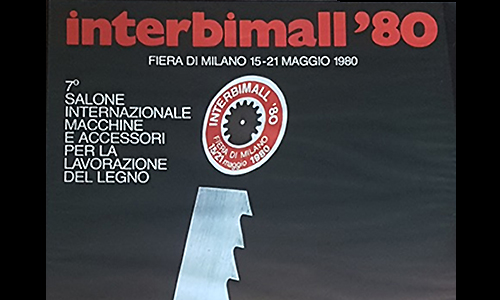 The seventh edition of Interbimall was organized from 15 to 21 May 1980. The duration of the event was reduced, getting closer and closer to today's canons. We report today all the maps of the exhibition halls with the list of participating companies.

As for the economy of the time, it was not an easy year for Italy, characterized by the attempt to absorb the negative consequences of the oil shock of 1979-1980. The year started well, in the wake of a late 1979 recovery, then a cyclical reversal followed: the main economic indicators had worsened, while prices, both wholesale and consumer, registered a considerable growth, over 20%. The woodworking machinery industry followed the national economic situation perfectly synchronously.
The growth in real terms of production was 10% in terms of quantity with 1.3 million quintals while in terms of value production the value was about 634 billion italian lira with an increase of 26.7% but as previously said with a similar inflation rate.
Even then, European leadership was disputed with (Western) Germany.